The river water level was too low, so we couldn’t take the boat from Siem Reap to Phnom Penh as we had planned before. The other option was a 7-hour bus journey. We opted for a bigger bus rather than just a van due to the space. It gave us a great opportunity to meet the locals, travelling with us. There were virtually no other tourists on the bus. Some of the locals were pretty curious about us, especially a little, maybe 3-year old girl with whom I was exchanging face pulling expressions as an entertainment. The road was bad. We got to Phnom Penh eventually, got a tuk tuk (the tuk tuk drivers almost overwhelmed us with trying to get us on their vehicle) to our AirBnB place. It turned out to be in the heart of the city, about 10 minutes walk to the river bank and about the same time to the market. Our place had a mezzanine like area where we had our bedroom and the downstairs area with a single mattress, a small table, a tiny bathroom and some bamboo furnishing. It was cute in its simplicity, and felt like a mini flat rather than a room. Just outside we had a balcony which was connecting our owners flat – Australian dude with his Khmer wife – with ours. 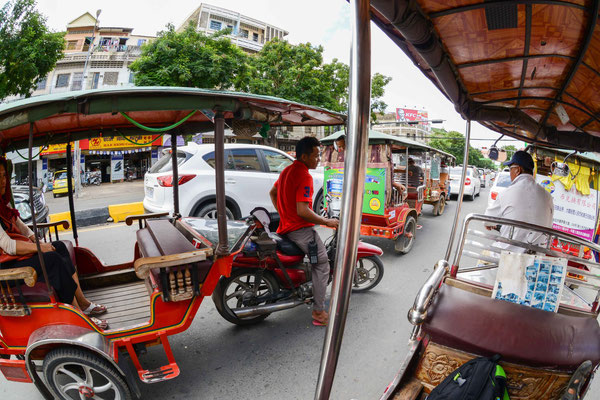 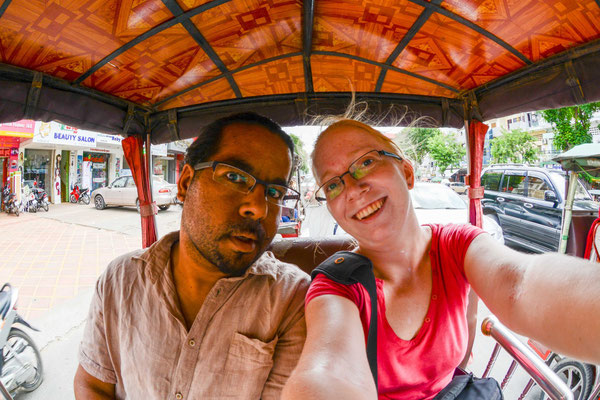 We agreed to go with the same tuk tuk driver to the killing fields on the following day. Then we found out that we were actually going to go with his brother – who had no mirrors attached to his motorbike. I only noticed as we started going, and felt like jumping off the tuk tuk at that point. Phnom Penh is a really busy city, and there is one rule of driving there: do your own thing. Sounds like our driver knew what he was doing as he got us there and back in one piece. 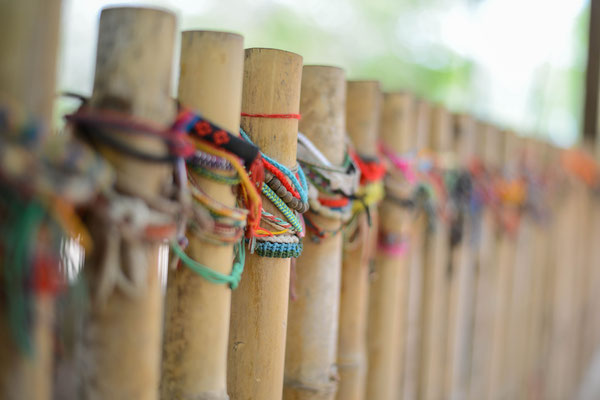 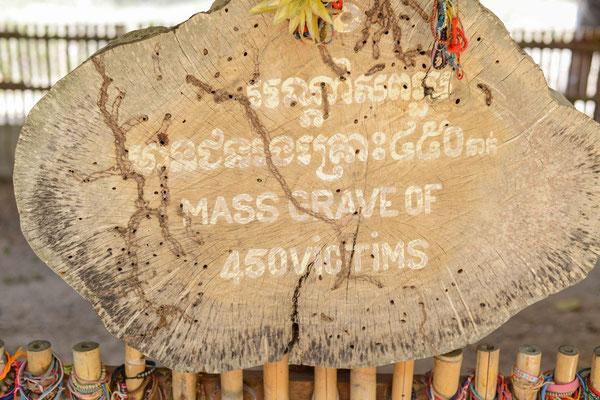 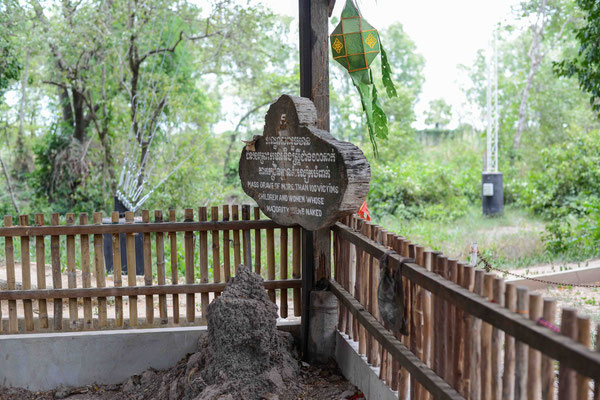 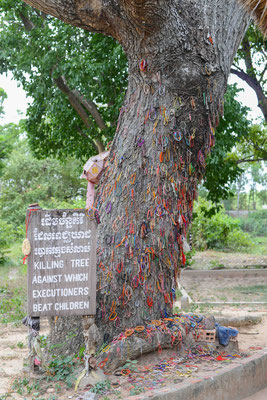 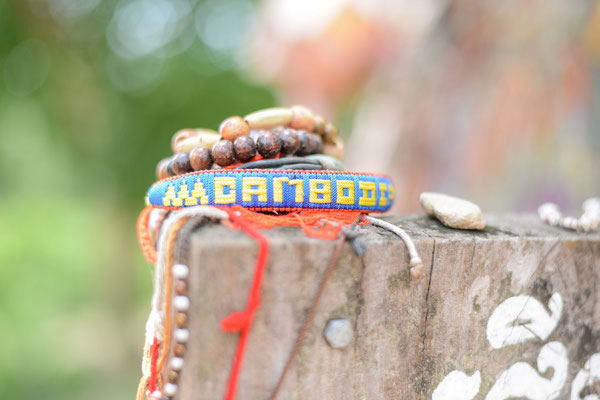 The Killing Fields place is something that one should see rather than read about it. The atmosphere felt kind of like the one in Auschwitz-Birkenau concentration camp in Poland which we had visited a couple of months earlier on. There is at least 20,000 people that were killed in those fields. In Auschwitz-Birkenau camp they used cyclone-B gas chambers, then burned people in the kilns once they were dead. In the Killing Fields in Cambodia they didn’t have such “advanced technology” (if I can even say that!) so the victims were killed with whatever was in the assassin’s hands – tools of different sorts, cutting throats or hitting heads.

There is a Killing Tree in the area, where the assassins would kill babies – smashing their heads against the tree, usually in front of their mother's eyes… 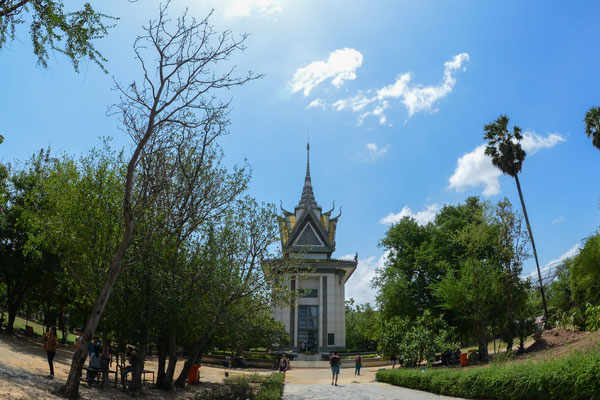 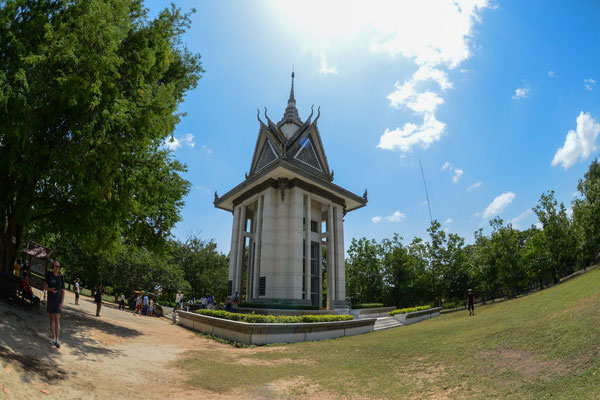 As we were walking around, we saw signs “please do not step on the bones”. As the Khmer Rouge and Pol Pot regime only happened about 30-something years ago, there were still bones in the ground here and there. You could literally see them. The most prominent thing there is the Pagoda, which has what looks like a mountain of human skulls. These skulls were all researched by forensics and their cause of death, age and gender of the person were described. Some of the skulls had holes from being hit by metal objects, some of them cracks from an axe etc. Truly horrifying when you think about it. 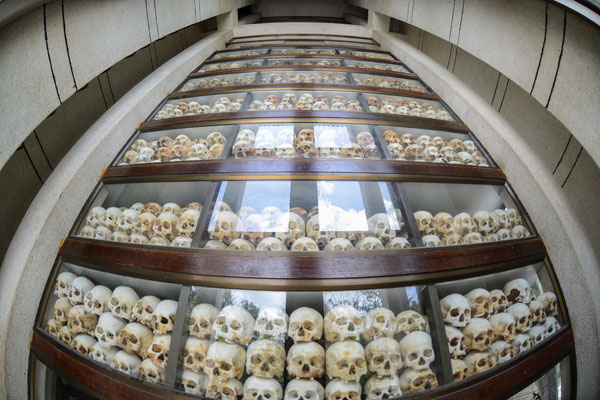 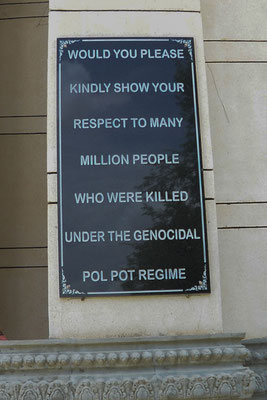 After the Killing Fields our tuk tuk driver took us to the Museum of Genocide. Out of so many prisoners there, there were only 7 survivors. Seven. Maybe it was the heat, or maybe too much terrifying information I had seen for 1 day, but at some point I truly felt like I was about to pass out. I had to sit on the bench under the trees and I was unable to continue walking around the museum which ultimately used to be a prison. 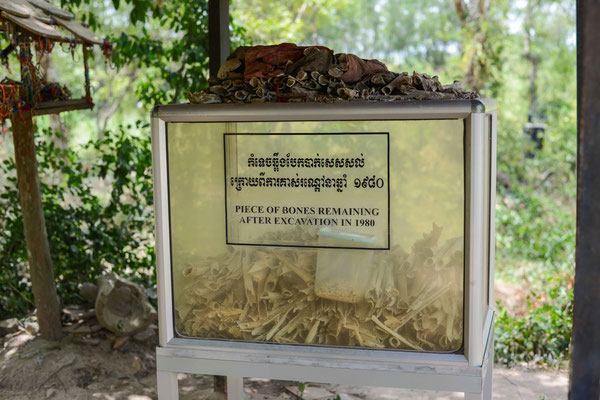 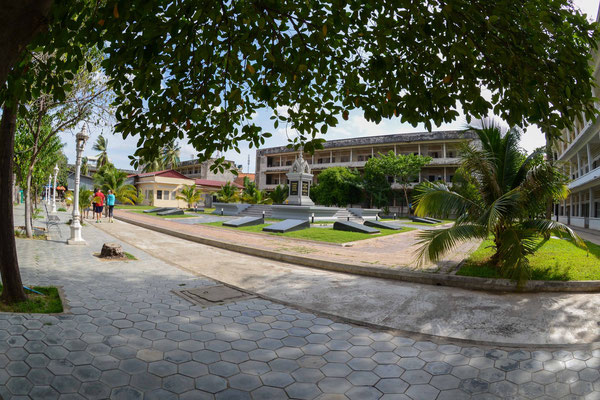 When we finished our Vipassana meditation retreat, we spoke to one of the participants who happened to be a Cambodian Buddhist monk. We travelled together to the Cambodian border and he asked us to come and find him in his monastery in Phnom Penh when we were around. And so we did. We found the monastery, then we chatted to another monk who happened to know our monk friend  – Buntim. He directed us to his place. Buntim was more than pleased to see us, and served us the best thing he could after that tough, emotional and extremely hot morning – icy cold water. We spoke for a while. I swear I have not met a happier person in a long time. Buddhist monks live out of other people’s generosity. It takes humility to a whole new level. And Buddhists respect them like nothing else. Buntim told us about his family – brothers and sisters, who lived in the countryside. He told us also a bit more about how he became a monk 27 years earlier. During Pol Pot’s regime, you could not be a monk. Monks were killed, along with teachers, doctors and the intelligence class, in the first place. Just after Khmer Rouge came to an end, Buntim found an opportunity to become a monk. He was a young adult by then. They agreed for him to be a monk for a year and then “they would see”. Those were times when young healthy men were recruited as soldiers. After a year the government could have said to him “you’re going to become a soldier now”. But luckily they didn’t and they let him continue being a monk. He’s travelled to India, USA, Birma and other countries. We truly had a fulfilling time with Buntim. I didn’t take any pictures with him, as I did not want to offend him. 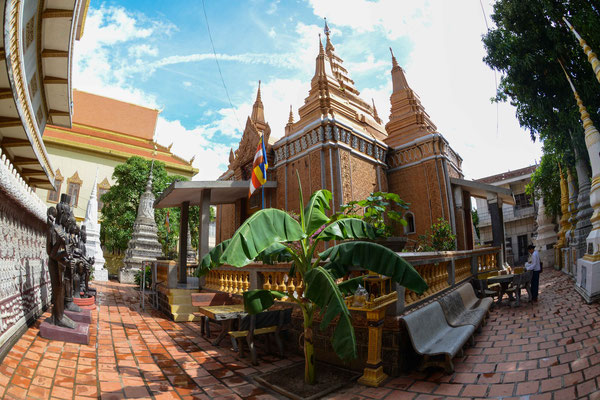 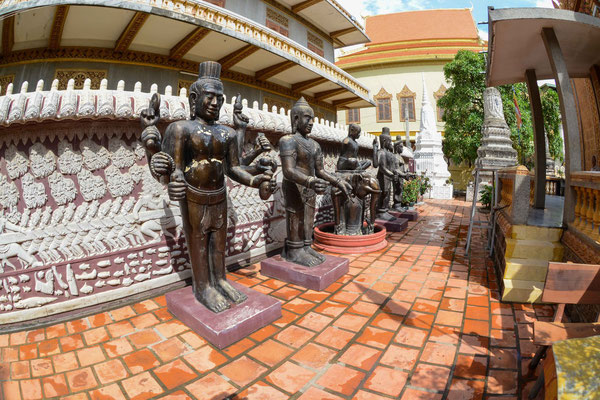 The rest of our time in Phnom Penh was slightly more light-hearted. We visited the National Museum which happened to be right across the street from Buntim’s monastery. A beautiful architecture, the building itself had its own natural air conditioning – wide open windows. The objects (mostly) weren’t behind any glass, you could touch them (although you were not supposed to) – something unacceptable in the Western World museums. 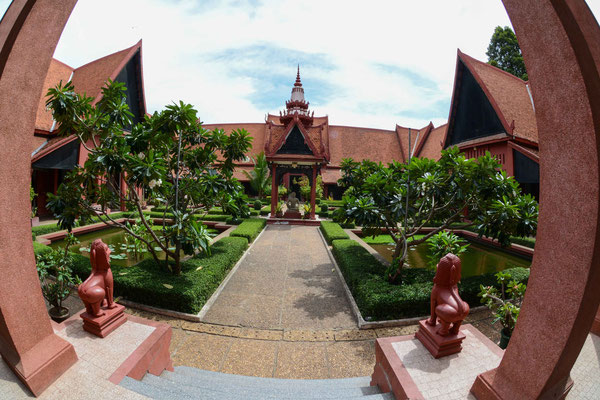 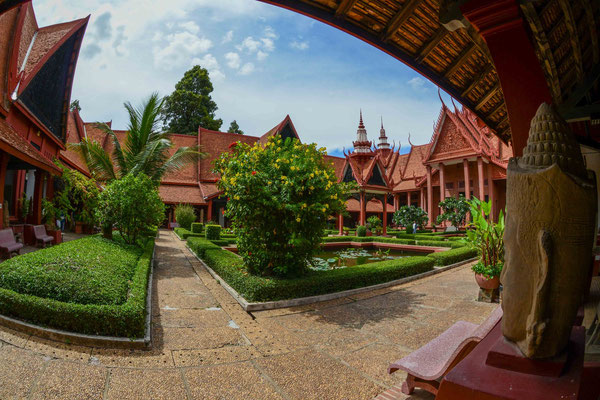 The market smelled – of everything. The fish, the fruit, the meat, you name it. We would walk to the banana stall, get a few and walk out as fast as we could.

By the way, if you took cash out of the ATM machine, it would give you US dollars. Their own currency was hardly worth anything, vendors would only give you small change in it. The Aussie guy – Robert – explained to us how the bar girls work. The bar girls usually rent a small room between 2 of them. They have children living somewhere outside of the city and their relatives look after the children while they work. We went for a beer to a pub, which during the Happy hour could cost as little as 0,5 $. The bar girl then would ask a guy to buy her a drink, which would be something like 3$. They do that so that they can get a small commission on top of their tiny salary, which is about 120-140$ per month. Take out the money for the room which is something like 30-40$ per month per person and you only have so much left. And they send money home, to feed their children. Crazy.

We were told a brick layer, if he didn’t have much experience, would get $2.50 a day (!!!). A more experienced one might get about $5 a day. How can you even live on that, you may wonder?

Cambodia is a strange country – you either have extremely poor people, who hardly make their ends meet, or millionaires driving the newest BMW’s, Toyota’s and Lexus’es. 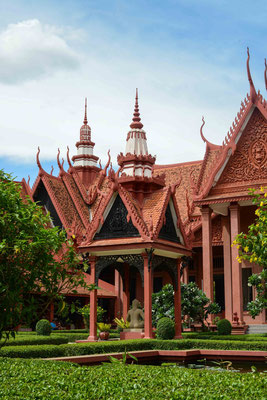 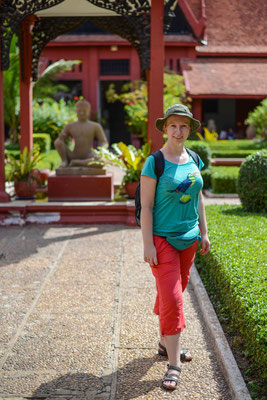 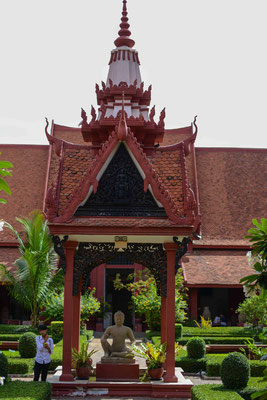 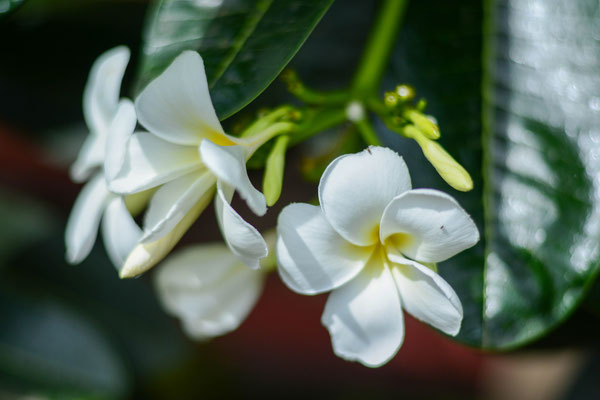 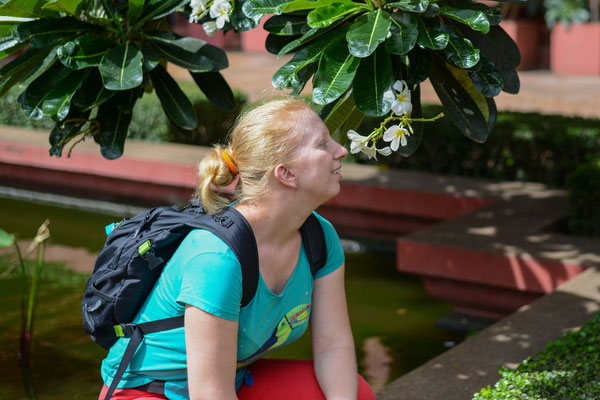 I had a bad rash, which slowly spread over my body within a week or so. I didn’t have any other symptoms, but I was still getting paranoid about whether it was a tropical disease, an allergic reaction or what? So when in Phnom Penh I decided it was the time to visit a doctor. I called my Travel Insurance company and within a day they set up an appointment for me at Royal Phnom Penh hospital. The appointment went ok, I was given antibiotics and told that this was probably an allergic reaction, possibly to the heat. The doctor didn’t sound so sure but at least I knew I wasn’t contagious. The hospital’s standard was top notch. You could tell only Westerners and rich people (and those having health insurance) could afford to go there. I saw other – public – hospitals in Cambodia, including Children’s hospital, which looked way overcrowded. Women with sick children would sit with their sick babies on the ground in front of the hospital, waiting to be seen by a doctor.  The whole sea of people. My heart  sank. I felt helpless, what could I do to help these sick kids?

We spent 4 nights in Phnom Penh, and learned more about Cambodia’s history and culture than we had expected. After that we decided to move down South, towards the sea and another adventure. I’ll tell you about Kampot in the next blog post.

For information and things to do in Phnom Penh, I used TripAdvisor. To book hotels, check out rates on Agoda.

If you liked this post, you may also enjoy: 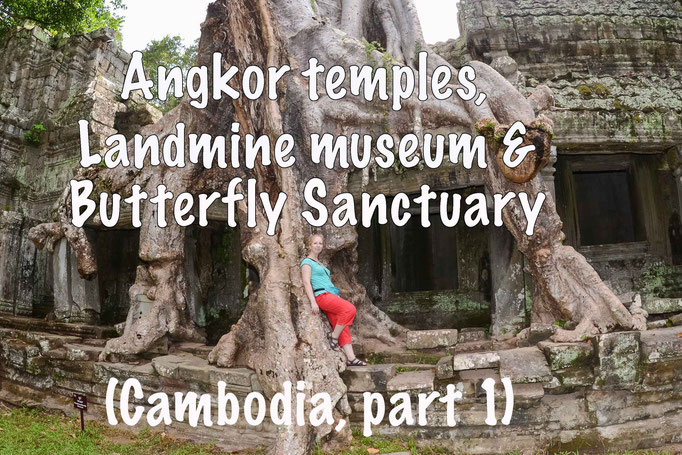 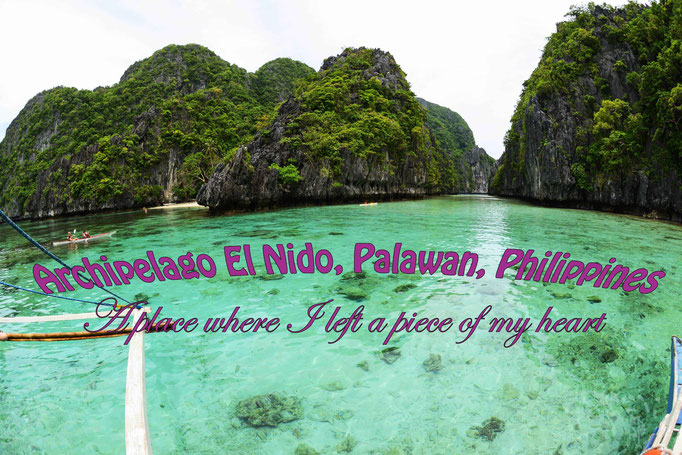 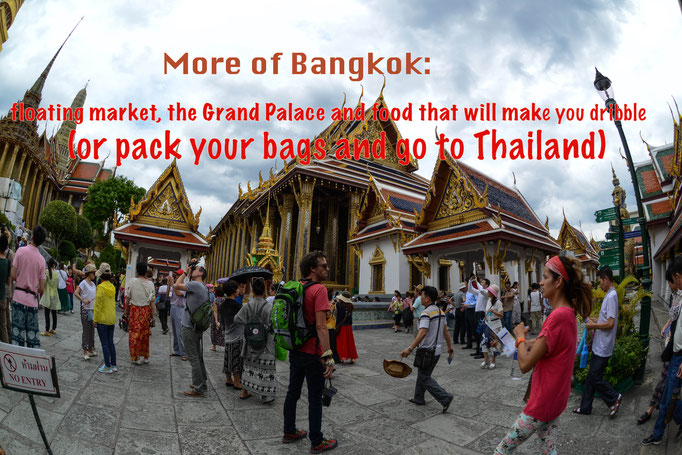